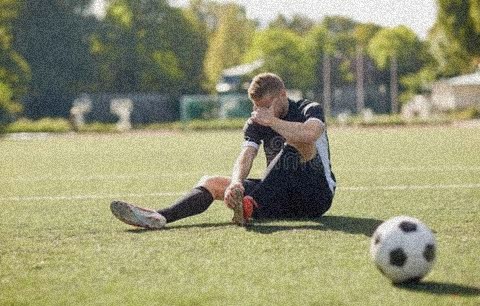 When he scored the remarkable goal which got fans all cheering and clapping out of excitement, his own team with slumped shoulders, wore sad faces.

They weren’t happy he scored the goal!!

At first he thought there’s something wrong with the score but when the commentator kept declaring the goal and the referee did not cancel, he began to jubilate – in confusion

As he ran around the field all alone and danced around, no one from his team followed him as usual for hugs of joy. He saw them standing with the referee pointing in different directions to prove their points.

He knew there was something wrong and went closer.

They were arguing against his score. He didn’t see the signs coming. He was ashamed.

“What are you doing?” He asked and they ignored him with scowls.

The funny thing was that they worked as a team for the score to happen. He didnt just score, he scored by their help; by teamwork!

He looked around, the fans had stopped jubiliating and were observing what was happening. He was ashamed of their action. Their opponent were amused and were trying in vain to tell his own team that it’s a perfect score.

What had come over them? He thought and watched his coach try in vain to stop them.

The opponent had accepted the score against them but his own team argued nonstop against their score!

Disappointed, he moved away from them, picked a spot in the football pitch and sat down. He placed his left elbow on his bent left knee and began to trace the white lines between his legs with his index finger. His shoulders gently heaved up and down in a soft sob.

Something had gone terribly wrong with his team. He had either failed as the captain or they failed him.

As a drop of his tears fell on the white line below, the sight triggered another sob.

He didn’t know what happened but when he looked up, he saw his team coach standing close to him with tears in his own eyes. He had been overwhelmed and shamed by his team that he didn’t know how to clear his face.

They were disqualified from the tournament but that’s not the main issue. The issue was that what his team did had exposed how disunited and alienated they had gone. But he was sure he had not done anything wrong to make them behave in such a hateful way. His hands were clean.

Every news platform were already airing the unfortunate incident and to think that he’s the center of it..

When the coach took his hand and walking away, he overheard his team member saying to someone;

“Its better we are disqualified than watch him ever score again.”

The opposing team stood by him to encourage him and one among them said to him;

“When you’re in a group and you’re the only one very successful, watch it. Soon enough, the dead beasts in them would be resurrected by intense envy and jealousy. The beast begins to overreact. So, do not be bothered by their actions. Keep standing.”

With all the encouragements from fans all over the world and sports officials, he went home encouraged, stronger and more determined.

This is an imaginative writing and is fictitious. The story is unrealistic as is the case with some fiction. However, the second to the last paragraph of the story reveals the reason behind it.

Keep being happy for others. It could be you next.

Have a great day!

3 thoughts on “The Sad Winning Team”

Welcome To The Artistic Words Of Creative Writing